Siam Piwat Co., Ltd., the owner of Siam Center and Siam Discovery, joining hands with Siam Commercial Bank Plc., Thai Health Promotion Foundation (ThaiHealth), Design Catalyst by SCG Chemicals and acer Thailand, recently hosted "Siam Center & Siam Discovery 100 Designs 2013" contest under the theme of "Redefine Living" on the 1st floor of Siam Discovery. Aiming to improve the people's quality of life, the event presented the prizes worth over 100,000 baht to the winners who came up with the best eco-design.

Chanisa Kaewruen,Marketing Promotion Executive of Siam Piwat Co., Ltd., said that Siam Center & Siam Discovery 100 Designs has been encouraging the younger generation to present their green ideas throughout these years. This year, the event was organized under the theme of "Redefine Living" to offer the people at all ages to fully express their creativity. The contestants, as an individual or a group of two, must design the items to solve the environmental problem and improve the people's quality of life. To find the solution, they need to look at the problem and design the practical items from recycled materials. Out of 300 teams joining the contest, only 10 entered the final round and had a chance to attend the plastic design workshop with the team of Design Catalyst by SCG Chemicals in Rayong province. Then, they came back to design their products.

In the event, the work of 10 finalists were displayed and selected by the judge panel. The first prize, offering 30,000-baht cash, went to "Blooming in the Rain" by Mr. Raksit Panyalertlakana, 26-year-old ceramic designer. The second prize, offering 20,000 baht, went to"Save & Save"by Mr.Worawet Atthaprachong, 22-year-old junior student of the Faculty of Fine Arts, Burapha University. The third prize, offering 10,000 baht, went to Miss Saisuda Kaseamtanasak, 21-year-old junior student of the Faculty of Fine Arts, Burapha University. The Popular Vote that received the most 'like' in the facebook and instagram of Siam Center and Siam Discover will be announced after the event. Every winner also received the prizes from acer. In addition, the Best of Plastic Design by SCG Chemicals prize went to "Stick and Flow Bowl" (โถ ปัก ปล่อย) by Mr.Supanat Make – Ka –Yai and Mr.Pakpoom Prasongsantisuk, 20-year-old student of the Faculty of Science and Technology, Rajamangala University of Technology Bangkok. Both of them would join Business of Design Week in Hong Kong as an award. In addition, ThaiHealth would offer the funding to any practical design that can be further developed the people's quality of life.

Mr. Raksit Panyalertlakana, the winner, said that he got the idea from the human being exploiting the natural resources, especially "water", which requires high cost of treatment. Therefore, he would like to design the water-saving piece of work that improves the people's quality of life. The first thing came to his mind was the local wisdom in the past when the people saved the rain water to use it later. However, it is not popular now because of the hygiene issue. He therefore would like to bring back the local wisdom and combine it with the advanced technology. That is why he came up with Blooming in the Rain, whose exterior looks like the blooming tulip and interior is divided into two levels. The first level stores and filters the rain. The water then vaporizes and goes to the second level that keeps the purified water. This design can be placed in the communities, parks or bus stops to ensure that the public can most benefit from it.

Mr.Supanat Make – Ka –Yai and Mr.Pakpoom Prasongsantisuk, the winner of Best of Plastic Design by SCG Chemicals prize, revealed that they got the idea of Stick and Flow Bowl when they went to the major concerts or natural tourist attractions, which did not have enough restrooms. They therefore invented the mobile PVC urinal bowl. When the bowl was stuck to the ground, the waste would flow down automatically, using no water or the least water. The mothball could also be place in the bowl to get rid of the odor. This was the perfect solution for the concerts, beaches or mountains. 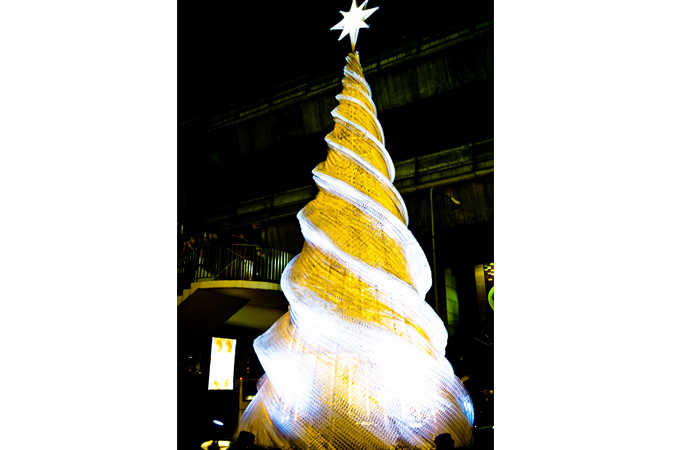 Besides displaying the entries, Siam Discovery collaborated with Miss Saruta Kiatparkpoomin turning the iron scrap into the one-of-a-kind Christmas tree called "Revive" to celebrate this upcoming festive event. Standing tall in the Discovery Plaza.Its spiral shape soared upward the sky like a firework, symbolizing the prosperity and new discovery. Thousands of 12 cm x 1.2 m leftover iron scraps from the hardware were put together into the eight-meter tall Christmas tree. The top of these twisted scraps was decorated with a star. The scrap is revived into something valuable and meaningful like the Christmas tree, which represented the desperate people. It would motivate the desperate people to think positive and create good things for themselves and the society.

The interested public can pose with the Revive Christmas tree and let it spark the idea and inspiration from today to January 15, 2014, at Discovery Plaza, Siam Discovery.