The Nepal's catastrophic earthquake has cost tremendous losses and extensive damage. Siam Piwat Co., Ltd., as the operator of Siam Paragon, Siam Center, Siam Discovery, Paradise Park, and ICONSIAM, is aware of such a loss and considers that it's important that we all join hands to help our fellow human beings. Siam Piwat, therefore, is honored to act as the channel for the charitable nature of Thai people. In this occasion, Siam Piwat, the Ministry of Culture and many an ally stepped in to organise an event called "SIAM PRAYS FOR NEPAL" from 1-3 May, 2015 at Parc Paragon, M Floor, Siam Paragon. The event is a charity intended for raising the fund to assist the victims of the earthquake. All income from this event will be given to Nepal via the Ministry of Culture on behalf of Thai Government under another project called "Wipe the Tears and Help Nepal". The official opening ceremony was on 1 May, 2015 at 3.00 p.m. at Parc Paragon, Siam Paragon.

The event was filled with kind-hearted people coming to donate for the earthquake victims in Nepal. Key figures of the donor included Prof. Dr. Apinan Poshyananda, Permanent Secretary of the Ministry of Culture, Miss Chanisa Kaewruen, Deputy Managing Director of Siam Piwat Co., Ltd., representatives from foundations and organisations both from public and private sectors, owners and operators of stores in the shopping malls, celebrities, artists, singers, and actors.

Prof. Dr. Apinan Poshyananda, Permanent Secretary of the Ministry of Culture, declared that the Ministry of Culture has always been helping the disaster victims both in Thailand and foreign countries. This time, it was meant for the earthquake victims in Nepal. We had such a good cooperation from Siam Piwat Co., Ltd. to organize this charity named "SIAM PRAYS FOR NEPAL" under the Ministry's project called "Wipe the Tears and Help Nepal". The charity project aims to call for charitable heart to donate for the disasters through various activities such as bidding painting by well-known national artists, contemporary artists, and other fields of arts, selling shirts, retail shops, shows, and performances as a reward to the kind heart of Thai people. The Ministry of Culture would collect the fund obtained from the campaign and activity for Thai Government to send to Nepal on behalf of Thai people. The donation will be sent to mitigate the suffering from the earthquake effect, give hope to the victims so that they can resume normal living, and bring back peace and security to their country.

Nepal earthquake victims, in cooperation with the Ministry of Culture, foundations, organisations, both from public and private sectors, by organizing "SIAM PRAYS FOR NEPAL". The event opens a chance for everyone to show their kind-heartedness by donating to help Nepal earthquake victims. The Company allocates Parc Paragon as the venue for activities and fundraising area from 1-3 May, 2015. The entire donation obtained from this event will be given to the Ministry of Culture on behalf of Thai Government. It is highly expected that this event will send forward the power to Nepal people affected by the earthquake and bring them back to be strong and live on."

In addition, there were other activities in this event. The Thai Designers Group also had a booth for selling shirts. There was also an exhibition sponsored by Canon that displayed and sold beautiful photo and postcards of Nepal taken by national artist Woranan Chatchawaltipakorn. In addition, the exhibition that portrayed the photos taken by world class artist David Lau who, with Phra Maha W. Wachirametee (president of Muttayalai Foundation), went to major places in Nepal. The exhibition boasted over 100 beautiful pictures before the destruction of the earthquake. The activities also made available a place for donating to support charity organization and help mitigate the suffering of earthquake victims in Nepal. Much attention was also given to the fundraising activities by the Foundation for Thailand and the Unify Thai Spirit Foundation led by singers and actors including artists from GMM Grammy such as J-Jetrin Wattanasin, Nut Sakdathorn, Klear, Cocktail, 25 Hours, Tattoo Colour, Pup Potato, and many more artist from AF and The Voice Thailand, Nok Sinjai Plengpanich, and Mum Laconic, etc.


For this special occasion, the members of Platinum M Card and VIZ Card can help donate by using the M Point as the donation until 3 May, 2015. The total of 800 points can be substituted to the money of 100 baht. It is undeniable that this event is the impressive united power of the charitable heart of Thai people to help our fellow human beings in Nepal. 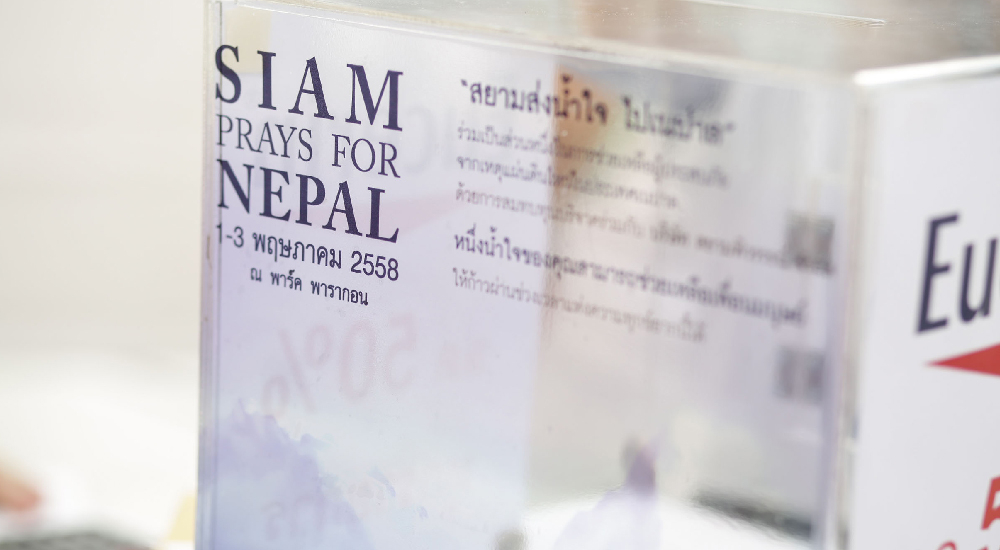 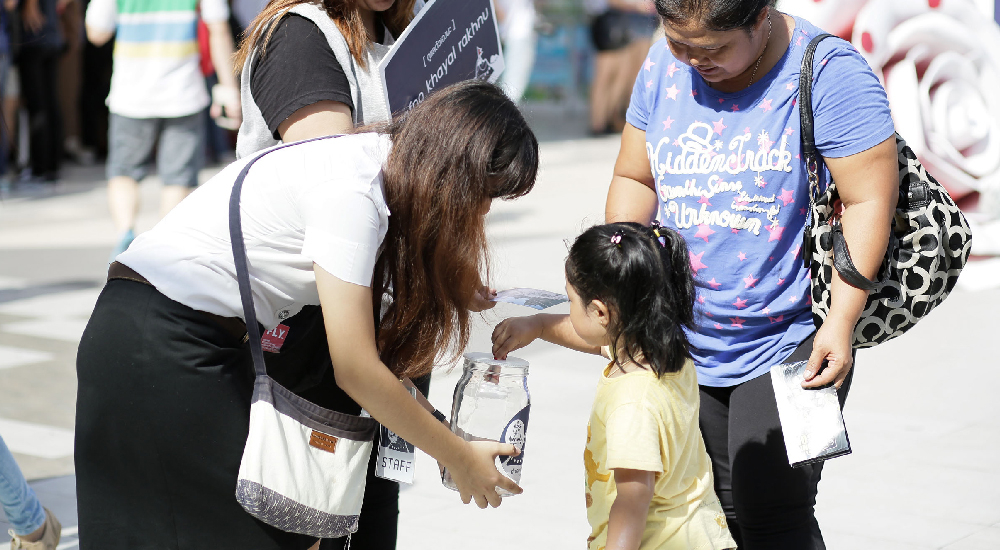 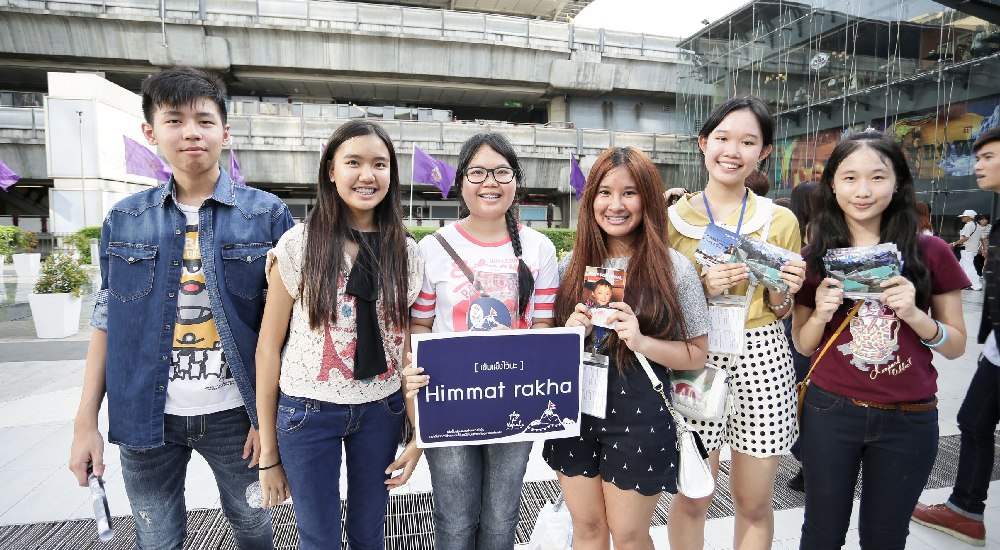 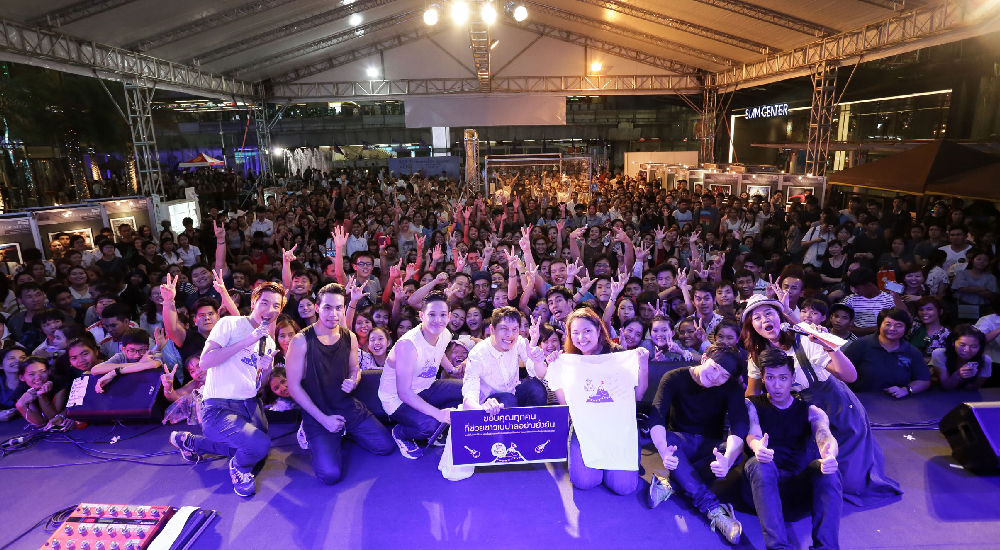