Siam Bike To Save the World" Invited the Cyclists to Save the Energy and Increase Green Areas At Discovery Plaza, Siam Discovery

Siam Bike To Save the World" Invited the Cyclists to Save the Energy and Increase Green Areas At Discovery Plaza, Siam Discovery

Siam Piwat Co., Ltd., the operator of Siam Center and Siam Discovery, together with Siam Commercial Bank Plc., Bangkok Metropolitan Administration, Art & Culture for Health Promotion, C.G.S. (Thailand) Co., Ltd. andCrank Magazine, recently invited the cyclists around town to join "Siam Bike to Save the World" at Discovery Plaza and Grand Hall of Siam Discovery, with Chanisa Kaewruen, Marketing Promotion Executive of Siam Piwat Co., Ltd., presiding over the opening ceremony. Aiming to foster the environmental consciousness among Thai people, the event encouraged the Bangkokians to ride a bike in the daily life to reduce the energy consumption. On this occasion, the celebrity cyclists, such as Niks Anuman-Rajadhon, Teerakit Jarujinda and Pimpayap Srikarnchana, joined the special talk to share their cycling knowledge and experience. Moreover, for the first time ever in Thailand, the guests witnessed the live painting of the bicycle frame by MAMAFAKA or Pharuephon Mukdasanit, graphic designer well known for his street art. The event also exhibited rare bicycles and presented the extreme bike show by nationally renowned biker among other constructive activities.

In the event, several cycling enthusiasts eagerly brought their bikes to join the activities. To serve their needs, Siam Center prepared the parking that could accommodate over 200 bicycles. As the highlight activity, Pharuephon Mukdasanit, well-known graphic designer of street art, used the markers to perform the live painting of bicycle frame in the colorful signature pattern called Hell Yeah!

Furthermore the guests crowded around the rare Old School BMX from U.S.A., Japan and Taiwan, which were very popular 30 years ago. Other items that attracted their attention were the nicely decorated low riders from Thailand Lowrider Bike Club and six Orbea bicycles, the super car in bike version, worth two million baht. Orbea bicycles are used in Tour de France and the one with the highest value costs almost 500,000 baht.


Before the bike trip, the cyclists had the medical examination from Samitivej Hospital, Sukhumvit, such as the measure of blood pressure, hand grip strength and the flexibility of back muscle, to make sure that they were ready for the ride. Moreover, many guests enjoyed shopping for parts and accessories in the market street while watching the extreme bike show from Korn "Boy" Sangboon, also known as "Boy Rama 8". With 15 years of experience, this extreme biker is a member of national team and represents Thailand in several international competitions. He excited the audiences with his trail bike show when he passed through the obstacle course.

Miss Chanisa Kaewruen said that Siam Piwat initiated Eco Projects, the first green project in the shopping center, to build the environmental awareness. Throughout these years, the project was honored to have Ass. Prof. Dr. Singh Intrachooto as the consultant. The most recent activity, "Siam Bike To Save the World", aimed to encourage the Bangkokians to reduce the energy consumption by riding bikes in everyday life. In addition to several fascinating activities for the bikers, the event educated the guests with the concept of "3R: Reduce, Reuse, Recycle"

In the "Bike to Plant Trees" activity, more than 200 cyclists with volunteer mind from Siam Piwat Co., Ltd., One Day in a Year project by SCB, Big Trees Project, ThaiHealth and Thai Cycling for Health Association rode bicycles from Discovery Plaza to Wat Phitchaya Yatikaram Worawiharnin Klongsan district to promote biking as the alternative transportation. Along the route, Coffee Bike group or professional cyclists led the group of volunteers to ensure their safety. After arriving at the destination, everyone planted trees in the temple to increase the green areas.

Teerakit Jarujinda, who displayed his favorite bike in the event, revealed that he started cycling because one of his best friends owned the bicycle shop and loved cycling. His friend therefore asked him to ride along. Despite only a year of biking, he was much stronger and healthier.

Niks Anuman-Rajadhon said that he loved riding a bike since he was young. However, he has taken it seriously for only a year as a good exercise. He always cycled to work, shop, or hang out with friends. However, he warned the urban cyclists about the road safety. Despite more bicycle lanes in Bangkok, accident could happen. Therefore, the cyclists should always be careful, wear helmet, and strictly comply with the traffic rules.

Pimpayap Srikarnchana revealed thatshe spent her childhood riding a bike with her family because everyone loved cycling. When they took a trip to other provinces, they would bring the bikes along. That was because they wanted to enjoy the sightseeing while riding a bike in the nice weather. It is very nice to know that Thai people became more interested in cycling because it will reduce the traffic jam and global warming. It is also the good exercise. 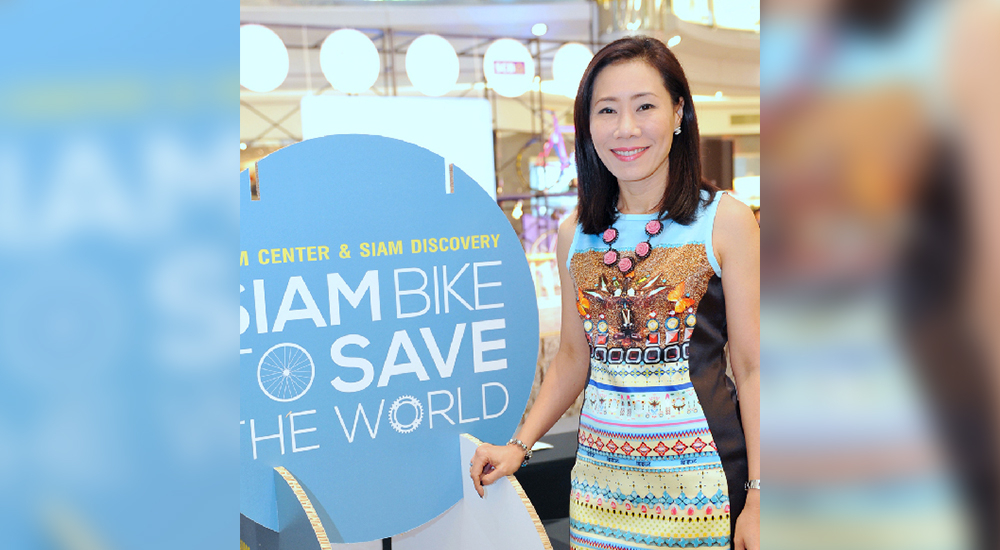 Siam Piwat partners with PChome, Taiwan’s largest e-commerce platform, to bolster a high-spending customer base, eyeing growth of over 100% in 2022.

Siam Piwat, together with the Faculty of Engineering, Chulalongkorn University, PPP Plastics, Plastics Institute of Thailand, and partner networks organized the “Let’s Close the Loop”